“A story is the shortest distance between people”

Stories can create understandings and bonds between people that you don’t think could ever be possible. Holocaust survivor and author/storyteller Roselyn Bresnick-Perry even said, “It’s hard to hate anyone whose story you know.”

Researchers at Johns Hopkins University found in a 2014 study that the best way to predict the success of Super Bowl commercials was not whether they used well-known celebrities, had sex appeal, or even comedic value, but whether the ad told a story. Character-driven stories actually cause oxytocin synthesis in our brains which make us more engaged, and helps the information resonate with us.

In short, stories are an effective way to transmit important information and values from one individual or community to the another, and the courtroom is no exception. Every trial attorney knows there are at least two sides to each story, and winning cases has everything to do with which story the judge or jury accepts.

In fact, some scientists theorize that our dreams are nothing but random neurons firing in our brains, and when we awake, we instantly try to piece those random bits of information into a string of events, a story. Jurors communicate to each other in stories. I conducted research published in Storytelling, Self, Society, which found that 35% of jurors tell stories relating the case to themselves when trying to make sense of trial information. If you do not tell a complete story, jurors will find the holes and fill them in on their own, often reasoning through the actions of a party as though they or someone they know is the main character. This is not a good thing for your case, because this same study found the majority of stories jurors told were about the party they did not side with (60.7%), meaning that they were finding the need to fill in the blanks of the story they least believed. Furthermore, these critical stories predicted verdict leanings 85.9% of the time, while supportive stories predicted verdict leanings only 63.6% of the time.

Transforming your case into a winning story

Language expert Kenneth Burke, in his frequently cited 1945 book A Grammar of Motives, developed a method of analyzing the semantic dimensions of language through a five part “pentad of dramatism” which is made up of five rhetorical elements. These might sound very familiar if you have ever taken a creative writing, advanced public speaking, or even acting class: 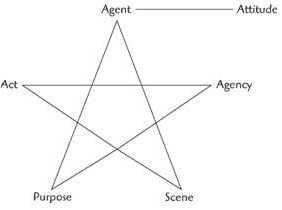 Burke says we each have preferences for certain parts of the pentad and that we choose words based on their dramatic potential. All good stories must consider each of the elements of the pentad, but as a storyteller, you should determine which are central to your story. What you choose is critical to the tone of your story. This is akin to the framing of a news story, and how it can have a major impact on how a news story is received.

“We not only interpret the character of events…
we may also interpret our interpretations.”

Burke referred to the combination of two elements, analyzed in relation to each other, as a ratio. Certain ratios might be central to the story, and the perception of the story may change as different elements or ratios are highlighted.

First, sit down with the five elements of the pentad. List off as many options of the various elements you can think of. Make one pentad for the defense story, and one for the plaintiff story. Spend time with each of the elements, trying to focus on the main and most important concepts within each one. At this point, it should become clearer which elements you should focus on and how you should relate them to each other.

Cater your opening and closing statements to this story. The opening statement of your trial is going to “set the stage” for everything that the judge or jury will hear. Writing the opening and closing statements should come after you have a strong grasp of what your overall story is, you don’t want to put the horse before the cart. Writing the opening statement before fully developing your story can cause your opening to follow your pre-trial memo, thus making it less about a story and more like a lecture. This loses audiences.

Next, put your story up for sale, see who is buying. As an attorney working on a case for months, even years, it is easy to get caught up in every small detail of a case. This is great because you need to know your case inside and out. But it can be detrimental to an opening statement if an attorney doesn’t give the story to a judge or jury in a way that makes the most sense to an outsider, someone new to the story. If you have a trusted colleague, tell them your story and see how they perceive it. Better yet, test your case’s story before an unbiased mock jury to learn what resonates with jurors, what does not, and what gaps in the story jurors might fill in on their own. Working with a skilled trial consultant, someone who has experience shaping complex cases into meaningful narratives can also be very helpful. You would never submit a brief before proof-reading it; taking in feedback and suggestions from a trial run can improve your story immeasurably.

Finally, it is an iterative process. You may need to go back to the pentad if certain parts of your story don’t sit well with you, your client, or your audience. Remember, it is not enough for a juror to just buy your story, they need to be able to retell it convincingly to other jurors. It is this retelling of the story during deliberations that wins you a favorable verdict. So, long story short, simple is better.

When corporations or professionals find themselves defending themselves in litigation that attracts media attention, the instinct is to respond to…

By Traci Feller, Ph.D.   When asked what was the earliest form of communication, you might think back to cave…